I’m joining in on a new linky-thing called “Kids Make the Darndest Things” over at Jen’s.  Sounded fun because my kids are ALWAYS making things.  I have 3 kids, so storing/keeping all these masterpieces is a challenge.  I have gotten better and do actually throw some of the minor works away.  Then I have 3 professional portfolios I bought at an art store that are about 3’x 4′ that I wrote their names on and put the better works in.

Close up of his “death penguin”

OK, this needs an explanation… Max has sensory issues and the school allows him to doodle during lessons.  I went in one day and the ENTIRE closet door was covered with his doodles.   This was what was left when he brought it home.  The middle says “Max Rules” and the rest is a hodge-podge of creativity.  He was really excited because he designed their class surfboard for field day and the design won for the entire elementary school! 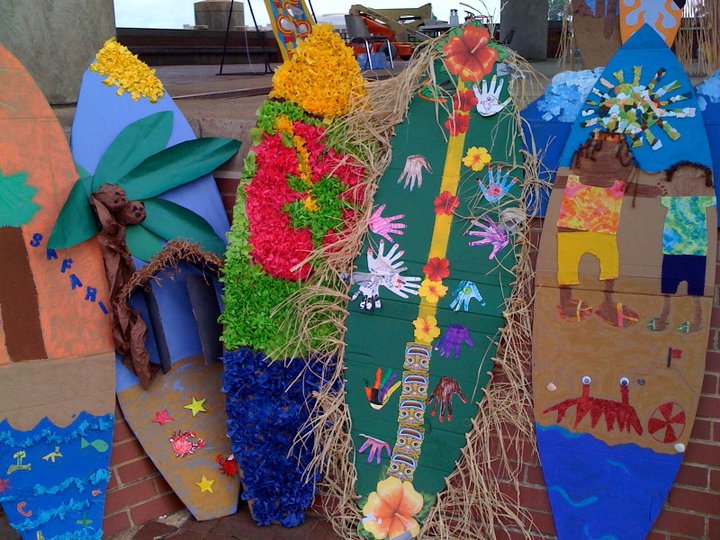 Their board is the one on the right with the kids
Emily won a contest at school too.  She designed the new middle school t-shirt!  She is a fantastic artist and I imagine that will be her career path (if not science.)

My little dude is big on making “mad scientist stuff.”  I find potions and experiments all around.  My freezer is teeming with frozen mixtures of “I don’t want to knows.” Recently he took a test tube and filled it with “flour, and a bunch of stuff” he says.  I don’t think it’s flour, but it made a tornado in a tube which is actually really cool.

What creative, crazy things are your kids making?  Come join up and tell us!

After dance and guitar lessons (Manic Mondays) we decided to tell the kids the news so that they wouldn’t be wondering why mommy’s been so (grouchy, sickly, tired, tired, tired.)
*Note- we were at a restaurant since we eat out almost every Manic Monday night.

They are all brainstorming baby names already so I guess they aren’t too upset!


*Side note:  I found out Max had told everyone at school the day after this conversation! Yikes.  I am not out of the danger zone yet so was hesitant to post this, but hey, I think everyone knows already!

I uploaded my camera and found these pictures…

What strange places my camera/phone goes without me…

I found this on my phone messages!

Jacob’s Message to me

My kiddo after the LR Kids Marathon!
This past week was so exhausting. I had federal jury duty and was really excited about it. I am 37 and this was the first time I’ve ever been called for jury duty of any kind. It was a crazy, horrible case, and I was sort of hoping (after they had briefed us) that I wasn’t picked, and actually I wasn’t in the original 14. They picked 32 of us from the 68 or so, then picked 14 from there, and then the attorneys picked a few new ones and got rid of some they didn’t like. Anyway, it ended up being a four day trial with more nicknames, hit men, orange jumpsuits, and the like. I even learned how crack cocaine was made… what fun. There is so much that goes on that we don’t realize (or try not to I guess.) All in all though it was a very interesting experience, almost enough to write a book on. I was really lucky and the jury was a wonderful group of people that I can honestly say I’m glad I met. I just rested today. Scott took Emily down to the capitol this morning. She was in the LR KidRocker Marathon and finished in 30 minutes. (They walk/run all miles but the last one ahead of time and only ran one mile today.) Maradee, Mom, and Popie came over and we had a hamburger cook out. Then after they left we finished our “camp out” on the trampoline. I promised Max we would today. We roasted marshmallows in the chimenea and rested on the trampoline in the sleeping bags looking at the stars. The kids thought it was pretty neat. They caved in though and are upstairs watching Star Wars. (What city kids I have!)