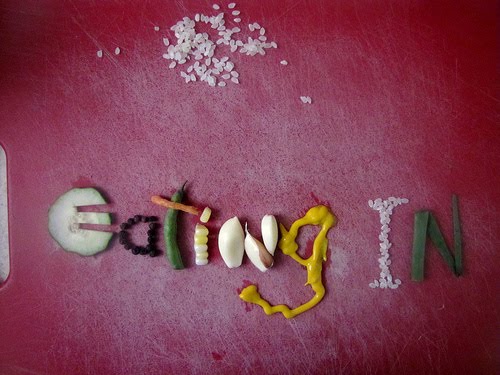 The Green Phone Booth had a post about the Huffington Posts’ “The Week of Eating In.”
It starts today!

See if your family can NOT eat out for an entire week.
Beyond that,
see if you can make your food from scratch (not a box!)

We are in the minority I think because we don’t eat out very often.   I like to cook (sometimes) and like to know what is going into my family’s tummies.  Also, we are always disappointed when we eat out it seems.

But…
on Mondays we ALWAYS eat out due to the fact that the kids have: school, dance, guitar, until 7pm, which makes us get home around 7:30PM.  Makes for a long day for little ones.  I’m going to attempt to throw some snacks in the van and then have pizza dough rising at home so we can make fast pizza when we walk in the door.  Not sure if it will work but we’ll try!

It seems that once you start planning meals, that the rest comes much easier.   No stress as to “What’s for Dinner?”  No questioning on the kids’ (and hubby’s) parts.
It’s so expensive dining out with a family of five, even if you are eating kids’ meals!  Eating out three times probably equals two weeks of groceries for us.

Some great sites for meal planning/recipes and such are:
Farmer’s Daughter
Feeding Five for Fifty
Make it From Scratch
Meal Planning
*My recipe blog isn’t great yet, but I have some recipes here.

Post a comment if you are in on the challenge!  Also we’ll have an update next Monday to see how it went (if I made it through today without caving…)