I’ve done this recipe before on my cooking blog… but I tweaked it to include actual measurements!

Patacones are what we call them in Panama.  In some places (Puerto Rico for example) they call them tostones.
Nothing brings back memories like a good plate of patacones.
Yummy grilled chicken and patacones on the beach…
I remember saving my money to ride my bike to the KC (Knights of Columbus) in Margarita to get a hamburger and patacones.  Later I found their sancocho was the bomb and had that and patacones instead.

We have always had problems in Arkansas finding good green platanos (plantains.)  Usually the stores have them, but they are maduros (ripe) and I despise ripe plantains.  (I know, most people love them.)  When mom moved to Puerto Rico she discovered the island secret of using green bananas, which are much cheaper in PR (and Arkansas.)  So, now I use green bananas if I can’t find good platanos.  They really taste almost the same if they are very green although maybe a little silkier in texture.  They are easier to peel and cheaper.

This is one of those recipes that takes me back to my childhood…
Here is my recipe using dried flowers (because, I am in Arkansas and can’t get fresh ones!) 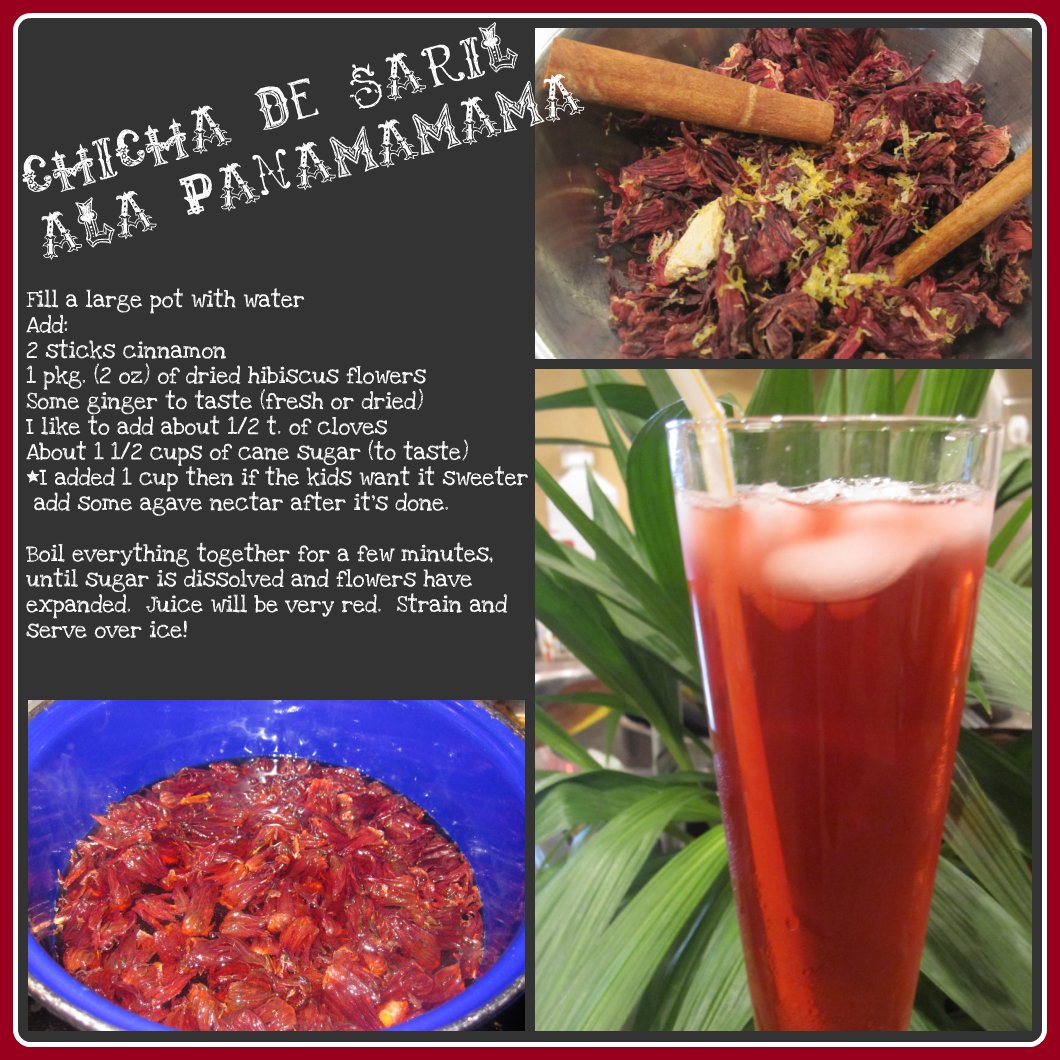 Saril, is the calyx of the hibiscus flower.  You can find dried ones at most Mexican or Latin American grocery stores.  In Mexico they are called “Jamaica” flowers because the drink originates from Jamaica.  (Well, technically it comes from tropical Africa…)

When it’s boiled you get a lovely deep red drink (similar to a Kool Aid punch) which actually is very good for you.  As a kid, I was told by my baby-sitters that it was good for your liver and iron and would keep you from getting colds.  Unlike other concoctions I didn’t mind drinking this because it was very, very, yummy.

*Now, with all the sugar in it I’m not sure how much of a help it can be in lowering blood sugar…

Empanadas are about the best comfort food around.  I grew up eating these yummy pastries from bakeries and carts downtown.  Every country has their version of a meat pie, and I believe most Latin American ones are along these same lines.  For my wedding my family and I made 100’s of these little dears and I can’t eat one now without thinking about it!
This particular recipe is from a military cookbook from Panama, made by the wives of the Intelligence division on the Atlantic side called “Cooking With Intelligence” (long, long, ago.) BUT, it says it’s taken from the “Interamerican Women’s Club Cookbook”- a club my grandma used to belong to in Panama.  My mom uses this one and doubles it.   I must say it’s much better than the one I used to use…

Sift flour and salt into a mixing bowl and cut in the chilled shortening and butter until it resembles a coarse cornmeal, using two knives or a pastry cutter.  Add a little water until pastry is moist enough to stick together in a ball.  Put dough in refrigerator for an hour.  Roll out dough on lightly floured board to about 1/8″ and cut with round cookie cutter or glass.  On each round of dough put a little of the filling, about 1/2 teaspoon.  Fold over and flute edges with fork.  Brush tops with beaten egg.  Bake in oven 400 degrees until golden brown.  Makes about 60 empanadas.

*Put oil in frying pan and fry meat a little.  Add ingredients and simmer for half an hour.  Salt and pepper to taste.

I’ll try and make some soon and post pictures for you!

My daughter had a Spanish final project to do and decided to do a presentation on flan.
She did the project by researching the history of flan (which was very interesting believe it or not) and then making a traditional flan and making a power point presentation on it all.  I think she did a great job.

Here is the recipe she used from Cocine A Gusto, a great cookbook I picked up when mom lived in Puerto Rico.  It’s published by the University of Puerto Rico, but is actually a really old cookbook originally- I think the first publishing date is in the 1950’s.  (That made for interesting Spanish cooking terms.)

The recipe: (translated for your pleasure)

Beat the eggs enough to mix the yolks and whites.  Add the rest of the ingredients and stir.  Prepare the caramel and pour a little in the bottom of each of the molds or ramekins.  Fill the molds and place in a pan with some hot water (water bath or bain marie.)  Cook in the oven (not preheated) at about 350 for one hour.
Makes 8 flans.

My Abuelita and Fidelia Hernandez (Panamá)

Chicas are homemade drinks in Panama.  In Mexico they call them “aguas frescas” I think, every country has their own versions and names for these yummy beverages.
Arroz con piña is my favorite.  It is a frothy, yummy, sweet, drink that instantly brings back memories of shopping on Avenida Central with my mom and Meme (mi abuelita.)  They would have big jugs of this for sale in little stores and it tasted so good when you were hot and sweaty from shopping with two shopaholics all morning! I learned how to make this by watching one of our babysitters, Delia. She was a wonderful cook and an even better person!

1. First cut top and bottom off of pineapple (piña.)

2. Continue by cutting rind off. (Do not throw away!)

3. Cut into quarters. Then cut down edge to get rid of center core. (SAVE.)

4. This is what you will have. A bowl of the cut up fruit, a top piece (to plant,) and a pot with all the end pieces, core, seedy pieces etc.

5. Cover the scraps in the pot with water. Add about 1-2 cups of rice, cinnamon to taste (or cinnamon sticks,) a little dash of cloves, sugar to taste (I like raw or turbinado about a cup,) and boil until the rinds are soft and rice is done. You can substitute the sugar with a can of condensed milk at the end if you like that taste, but I was trying to keep it lower calorie and this tastes as good. When it’s done take out scraps and toss them in your compost. Put what’s left in the blender and puree. Then pour into a pitcher over some ice to cool. To serve I like to get a glass of ice, pour glass about half full of milk, then the rest with the chicha.
Sprinkle with cinnamon.
You can add vanilla if you like and more pineapple juice if you like.
(Also, if you didn’t add sugar you can add the condensed milk to the pitcher and add a bit more water.)